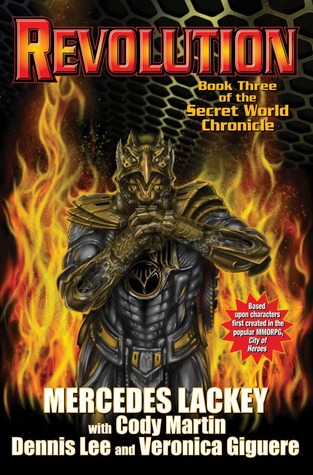 Thanks to Netgalley and Baen Books for giving me this book to review.

Echo is still reeling after the assassination of Alex Tesla, and the usurpation of Echo control by Dominic Verdigris. Bull is still in a coma, and there is nothing Bella can do to bring him out of it. At the same time, Red Djinni has taken over training Vicki, the only person left of Bull’s team of misfits, as Scope and Acrobat are off chasing Harmony after her betrayal. Meanwhile, CCCP are still helping the community, stepping in where Echo cannot, and, with the help of John Murdock and Sera, gaining vital intelligence on the Thulians.

Revolutions is a rather disjointed read, which is to be expected as it is written by various different authors, however I really enjoyed reading it as there are several threads running through the story which tie it all together. Whilst Revolutions is not a quick read it is very engrossing and leaves you wanting more.  It did feel as if the authors were concentrating on Dominic Verdigris rather than the Thulians; the alien invaders were rather a side line than the main story.

Red Djinni is one of my favourite characters, as even though he is a (mostly) reformed thief and a con artist, he shows throughout the books that he has incredible loyalty to his friends and the causes he believes are worth it. I love that every day he changes his visage to look like a different celebrity. I also enjoy the contradiction that is Vicki, as in her domain she is so confident yet outside in the big, wide world she is so scarred and vulnerable. There was not as much of Ramona and Mercurye as I would like, and I would love it if they could have a bigger part in the next book.

Anyone who enjoyed this book would also enjoy the podcasts, available at the secret world chronicles wedsite, which has other unpublished short tales, by the way, Bella's voice is very annoying! I would recommend Revolution to anyone who likes the first two books, Invasion and World Divided, or who like watching Agents of Shield.
Posted by Unknown at 18:38