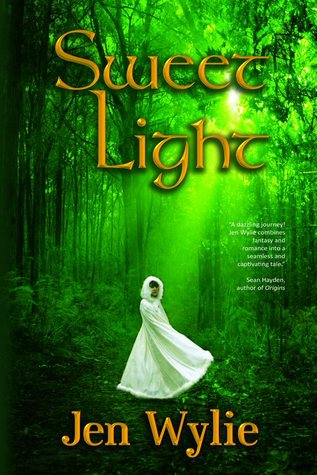 Shara is a Journeyman Healer, who is sent to the frontlines to heal the king’s army from an enemy army at their border. When the camp is attacked and Shara separated from the rest of the army, she finds a dying soldier called David, and manages to heal him. Whilst on their journey to the capital, Shara falls in love with him, but she finds out he is not who he seems to be. In the capital, Shana and David run into problems, David’s father doesn’t approve of Shana, Shana’s former lover, Tirel, arrives and she is involved in a love tangle, and a plot is afoot which could ruin Shara, and everything she loves.

Sweet Light is a nice romantic fantasy book which was interesting as the ending was not was not what I thought it would be. However, I did not find it as enjoyable as Wylie’s other books, the Broken Aro series, as it felt like the story was not as engaging.

I liked Shara as she was compassionate and a strong character, but there are two things I did not like about her, firstly, I have no idea why 3 men fall head over heels for her, she is not that remarkable, and secondly, she comes across much older than a teenager. David is wounded, vulnerable and his wounds run deep but he is strong and endearing. I did not like Tirel, partially because of his personality, but mostly because he slept with a 13 year old and he was in his late 20’s.

It seems like there should be more books in this series and I would be happy to read more of Shara. I would recommend Sweet Light to people who enjoyed Broken Aro.
Posted by Unknown at 20:29